RUSH: Looky here, folks. I have a story here my formerly nicotine-stained fingers. It's BizPacReview.com. The headline: "Ginsburg's law clerks line up to mourn and everyone stays about jarring lack of color." (Gasp!) What could this mean? Well, let's read further and find out together, shall we?

"The deputy governor of Illinois called attention to the elephant in the room as the memorial service for the late Supreme Court Justice Ruth Bader Ginsburg got underway. Christian Mitchell, the Democrat serving under Illinois Governor J.B. Pritzker ... noted the 'jarring lack of of color' in comments on social media about the law clerks who had gathered to honor Ginsburg who passed away last week at the age of 87.

"Ginsburg's former law clerks served as 'honorary pallbearers' and formed a dramatic backdrop on the front steps of the Supreme Court as her casket arrived on Wednesday. After a private ceremony, members of the public are allowed to pay their respects as the late justice lies in repose at the Supreme Court. As her casket arrived, an 'army of law clerks' were present, 'dressed in black and standing silently,' CBS News reported.

"Over her 27 years on the high court, Ginsburg had reportedly hired more than 100 clerks, and many came out to honor her on Wednesday," and it was apparently so striking the lack of people of color among this group of clerks that nobody said anything about it, and thus it became the elephant in the room. How does this happen? How does one of the greatest...?

By reputation, one of the greatest Supreme Court justices in the history of the known universe, how does it happen? An avowed, proud, acknowledged leader in all things progressive liberal. How does it happen that among clerks...? Do you know who the clerks are? The clerks... Let's see. What would be an appropriate term? The most appropriate term would not be "usable." 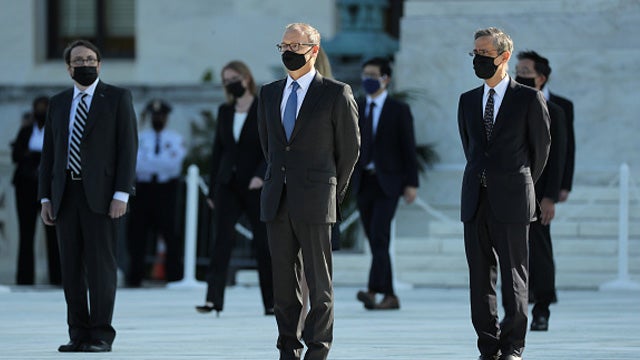 Is it "Aw, damn, never got around to it"? "I didn't notice!" Is that the excuse? How can that be? How can it be, "I didn't notice -- sorry -- that there aren't very many people of color among my clerks"? I don't know. It sounds to me like "systematic," systemic... It sounds to me like systemic whatever here. I mean, if it's very few clerks... If it's so noticeable that it's the elephant in the room, then it's systemic, wouldn't it be?

I'm stunned. I've had people say they saw the entire cadre of clerks, and they didn't see one person of color. It's not that there were very few; it's somebody who says they didn't even see one. She should have sued herself! You know, as somebody had worked at the ACLU, she should have sued herself for discrimination. But I don't think that she did.

Well, I don't know. I can't answer the question. All I can do is ask it, and I'm probably in big heap doo-doo just by doing that. But remember, it was BizPac Review, not me.