RUSH: The mayor of Louisville came out right before the program began -- maybe right as the program was beginning, claiming that -- "claiming." He was saying that a grand jury report on the Breonna Taylor murder would be revealed at 1:30. The way he made it look was like all hell is about to break loose in Louisville. 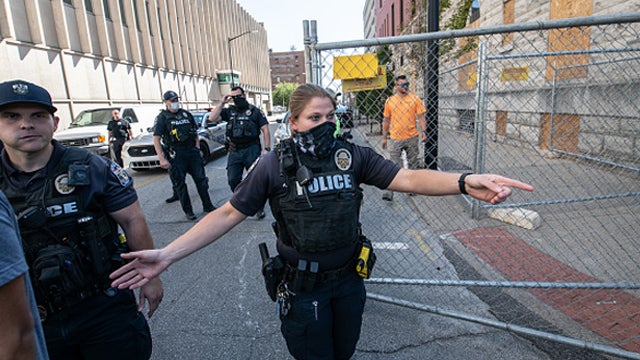 A total lie got its hooks into our country deeply, and it survived. The lie was "hands up, don't shoot." The lie was "the gentle giant," Michael Brown, was minding his own business walking down the street on a Saturday afternoon in Ferguson, Missouri -- and what was he doing? Why, he was... It was August, and he was thinking fondly of how, in just a few weeks, he was going to be going away to college and a new chapter in his life, a young life filled with promise.

And then this racist cop happened to drive by, and the racist cop happened to see that this black kid was walking along on the sidewalk and decided just to shoot him. And the cop went in there and Michael Brown saw what was gonna happen, put his hands up, and said, "Don't shoot, don't shoot;" the cop pulled the trigger. That lie still exists.

It's like the lie in Charlottesville where Trump supposedly praised skinhead Nazis as being good people. He never did. He never even got close to saying that. But that's another lie with hooks deep into our society and culture. Same thing happened in Ferguson. Then the grand jury report came out. The grand jury report was the truth. It said that the guy had held up a convenience store.

He had been high on marijuana. He was walking in the middle of the street, not on the sidewalk, and there was no way he was thinking about going away to college. And, furthermore, when the cop attempted to get him to stop walking in the middle of the street, he attempted to get the cop's gun by jumping inside the cop's car. And that's why the cop responded the way he did. 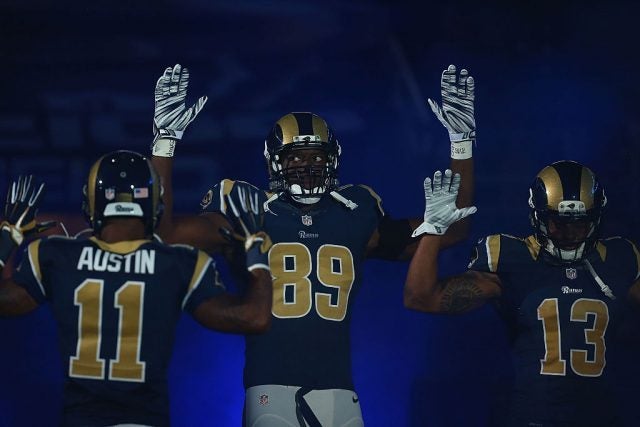 But, noooo! I mean, even the St. Louis Rams players are being introduced before the game with their hands up, as in "hands up, don't shoot," and it didn't happen. So now we have the grand jury reports that's gonna be announced in less than a half hour in Louisville. And whatever it is, probably, the mayor there is worried it's gonna cause all hell to break loose, and he's put a curfew on for tonight.

But the city... I think the city of Louisville has already -- without even a verdict -- paid her family a lot of money. So we shall see.

RUSH: Louisville has been boarding up for days in preparation for riots following the release of the grand jury report today. So, anyway, yeah, you could almost say there's no way that a sane grand jury should indict a cop for shooting back after being shot at. So we'll have to wait and see what's gonna happen.

(interruption) The cops were raiding the wrong house when they were fired at? Well, then how did her boyfriend get shot? If they were at the wrong place -- (interruption) Oh. Okay. So in your mind the cops are guilty here and need to be -- (interruption) Tragic mistake. Okay. Well, that's not gonna satisfy anybody. Well, I don't care. It may be what happened, but it's not gonna satisfy anybody. It's like "hands up, don't shoot" gonna be the only thing that was gonna work in Ferguson.

RUSH: We're doing our best here to keep what's happening in Louisville in some sort of explainable fashion. So here it is, as best I can explain this to you now: "A grand jury has indicted one of three officers on criminal charges in the fatal shooting of Breonna Taylor. Six months after her death in Louisville, the Jefferson County grand jury has voted to indict Officer Brett Hankison."

So the former detective, Brett Hankison, "has been indicted on three counts of first-degree wanton endangerment. Sergeant Jonathan Mattingly was not indicted. Detective Myles Cosgrove was not indicted." So if I understand what's going on here, the cop who was indicted has already been fired. He was charged with wanton endangerment of the neighbors who lived in apartments around Breonna Taylor's apartment.

There are reports that the protesters standing outside the courthouse are confused and livid. Now, I think "livid" is probably true, and they may be confused, but I don't... I think whatever the grand jury came out with today, these people that everybody's worried about rioting and so forth were gonna do it anyway. Now, we have an audio sound bite here from a CNN reporter by the name of... 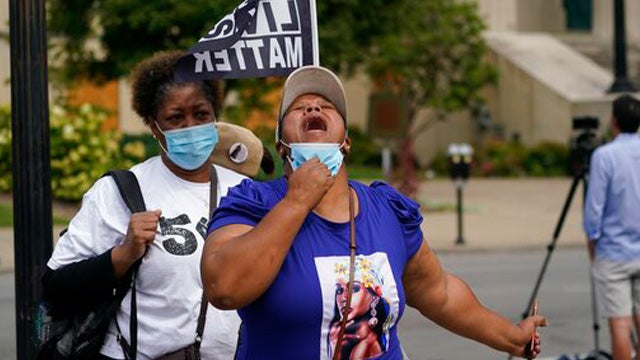 What is his name? Shimon Prokupecz or maybe it's "Procupez" or "Kopacek," or "Kopoocek." no, P-r-o-k-u-p-e-c-z. Prokupess. Prokupic. Prokupecz. Prokupez. I think I've covered it there. Anyway, his report on the grand jury indicting the former police officer Brett Hankison on three counts. Here's the report. We'll hear what he says.

PROKUPECZ: People here are very upset about this, Brianna. We have some folks here. So there -- there is a woman who I was talking to; she in tears over this decision by the grand jury because they feel the prosecutor did not go far enough. And if reaction from here is any indication, then this indictment is not gonna be sufficient for a lot of people who've been out here protesting every day, sitting here for weeks calling for justice.

PROKUPECZ: Uh, you can hear behind me already. I think a lot of people, Brianna, are gonna be very unhappy about this.

RUSH: Well, that it sounds like CNN giving a thumbs down to the grand jury report. It sounds like CNN is saying, "Go ahead and burn it down, gang!" Does it sound like that to you? Pretty much. CNN would like to see it burn down. All that coverage, blame it on Trump, blame everything on Trump, see where they can get... So that's the status.

RUSH: The Kentucky attorney general is a Republican, Daniel Cameron. You've heard. He was great at the Republican convention. He's African-American.

That's not gonna matter, though. The mob's got its mind made up months ago what happened here. So you watch. This is predictable as what happened in Ferguson, Missouri.

RUSH: This is Leanne in Greenville, South Carolina. It's great to have you here. Hi.

CALLER: My question is, now that the family got $12 million for Breonna's death -- and it was an accident -- does this mean every time somebody gets shot accidentally by the police, they're gonna start paying out millions of dollars?

RUSH: Yeah, well, that's because tensions were so high. This is George Floyd is happening at the same time. The country is being roiled. I think in Louisville, they always wanted to shut this down as quickly as they could, and --

CALLER: Well, it didn't work, did it?

RUSH: Well, no, never does. But that's what knee-jerk reactions always end up producing is wrong reactions and wrong decisions.

CALLER: I think we'll probably see more of it.

RUSH: But see, you're gonna have a lot of people who are not gonna accept the fact that the cops didn't do anything wrong. This is the problem. You're gonna have... In Ferguson, Missouri, to this day "hands up, don't shoot" is still thought to be what really happened in that town.

CALLER: You're right about that.

RUSH: The grand jury reports... There were two of them! Don't forget, they had the first grand jury, and then what's-his-face, Obama's wingman in there -- what's his name -- Holder.

RUSH: Eric Holder, the attorney general, went in there and did his own grand jury, and it came back the same way, and still the left is out promoting that the whole thing was "hands up, don't shoot" and the cop's a vile, racist murderer.

CALLER: Well, they all should be in jail.

RUSH: Well, this is why it's so... I don't want to use a quaint word like "unfair," but they're destroying our society. They are destroy it, the media and these constant lies. This business of Trump supposedly saying complimentary, nice things about neo-Nazis? That didn't happen! But you take these young 20-, 24-year-old white college women, it has ruined them, the ones that believe it.

It has destroyed them! They're sitting there thinking the president of the United States got elected and is still supported by a bunch of white racists who probably think the same thing, when he never said it. The media is responsible for so much of the state of our culture and society right now by promoting, by cementing nothing but a pack of lies, starting with Trump is not legitimate because he stole the election working with Putin.

Despite the Mueller report, despite that there's never been a shred of evidence. Why does anybody believe it? There's only one answer: The media! And people do not question it. Not nearly enough people question what they see. So, yeah, $12 million was paid off, and that was... It was not so much hush money. It was just designed to... They're trying to buy peace.

RUSH: All right. The spontaneous, peaceful protests in Louisville. That's right, Antifa and Black Lives Matter have recently been seen unloading riot shields and signs from a U-Haul in a parking lot 15 minutes after the grand jury decision. 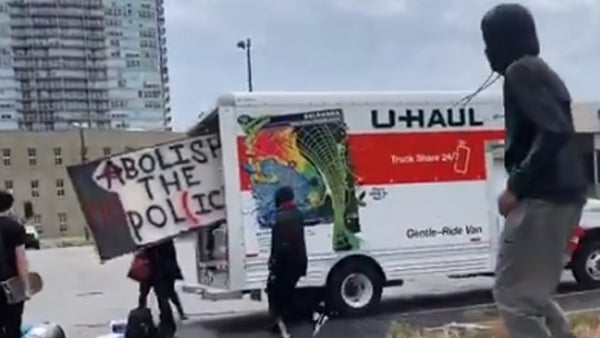 So they had the U-Haul loaded. It was all ready to go for the spontaneous peaceful protests. Riot shields and signs already loaded in the U-Haul in a parking lot 15 minutes after the grand jury announcement.